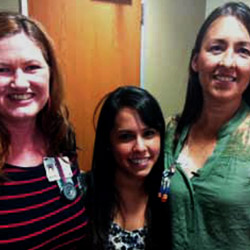 A student walking through a Massachusetts college campus engaged in one small act of kindness that saved the life of a Denver-area woman and started what both say will be a life of friendship and activism for stem cell and bone marrow transplants.

Three years ago, 20-year-old Dianne Aguirre paused for 30 seconds to get her cheek swabbed at a booth at the University of Massachusetts. She was told she had a one percent chance of being matched as a stem cell/bone marrow donor.

About the same time, 45-year-old acute myeloid leukemia patient Christina Schnese was told her Hispanic descent made it unlikely she would be able to be matched with a donor whose stem cells could save her life. She’d spent eight months just getting a firm diagnosis, followed by months of chemo and an almost life-ending infection, all before finding the Colorado Blood Cancer Institute (CBCI).

Both predictions were wrong. Last month Christina and Dianne met for the first time since Christina’s transplant in November of 2010. “It was amazing. … I felt like I saved the right person. I couldn’t have saved a better life,” Dianne said.

“I was freaking out. I thought I would disappoint her. I couldn’t stop crying the hours before we met. I didn’t want her to think I was wasting my second chance at life” Christina said. “Meeting the woman who saved my life brought out a whole different set of emotions.”

Their worries were for naught. Dianne now calls Christina “Big Sis,” and the two have started a nonprofit to increase the donor population among African Americans, Hispanics, Asians and Native Americans by 50,000. Christina, who owns a telecommunications consulting company with her husband said, “I’m taking my business experience over to the nonprofit side.” She’s busy talking to donors and investors to get their support for ambitious plans including a retail-clothing outlet for cancer patients.

Dianne is back in Massachusetts working as a nurse’s aide to further her chance of admission to a physician’s assistant-training program, as well as enlisting other potential stem cell and bone marrow donors.

Christina is feeling “awesome” now. She has high praise for the physicians and staff at CBCI and P/SL. And about Dianne she says, “Whatever she needs, I’m there. She’s part of my family now.”