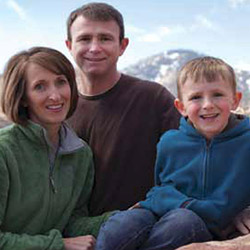 “Five years brings a lot of healing. I’m back to enjoying the outdoors with my family. I volunteer in my son’s classroom. Sawyer’s already in first grade! I feel great!” Sheila Gannon described herself five years after cheating deadly leukemia, diagnosed during the final stages of her first pregnancy. She safely delivered Baby Sawyer two days after diagnosis and began the battle for her life.

“Sheila was much sicker than many transplant patients,” Dr. McSweeney said. Another infection required massive white cell infusions and heroic efforts from the staff collaborating on her treatment. “I think for all of us, to see Sheila pull through such medical adversity with a new investigational protocol, it was a great relief and huge success,” he said.

Sheila volunteers for the Colorado Cord Blood Bank. “It’s been an important part of my journey ... encouraging people to donate cord blood so that people in situations like mine have access to these life-saving McSweeney.”