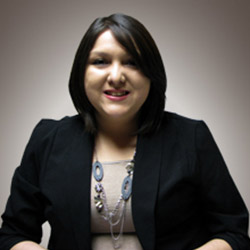 The phone call on a Friday in April, 2008 announcing, “You have leukemia,” hit Monica Avila like a lightning bolt. She was 21 years old and studying for her last set of final exams at Johnson & Wales University before graduation.

“I had no idea what I had. My aunt, who is a doctor, had to explain it to me, “she said. Treatments started the following week. Now, Monica is coming up on what she calls her fourth “second birthday,” the day she got a bone marrow transplant at the Colorado Blood Cancer Institute (then the Rocky Mountain Blood and Marrow Transplant Program).

“The hard part is getting ready because you have to have a higher dose of chemo therapy and then radiation to kill off all the bad cells and get ready for the good,” Monica says. Her teenage brother, Rey, was her donor, and she was the program’s 1,500th transplant patient.

The procedure was easier that she anticipated. “I thought it would be painful, but it was kind of like getting blood. The only feeling I had was a tingly sensation – like there were a bunch of ants inside me. I wanted to scratch for the first few minutes. “It took about four hours to prepare and draw the marrow from her brother and then a bit less than an hour to infuse her.

Then there’s the waiting. The uncertainty of seeing “…what’s going to happen. My body had been wiped clean and I had to wait for it to start producing red and white; cells and platelets.”

Clearly, it worked, Monica is energetic and her long, dark hair is heavy and glossy. She plays dodge ball and kickball. Soon she’ll be off on a European vacation – just one of many, she hopes. “Dr. Michael Maris says he likes to hear about my kickball, dodge ball and travel adventures. The people at CBCI are always concerned about my health and personal life. They have given me excellent support. They actually do care about patients.”

Monica is not completely out if the woods. She still takes a large array of drugs to suppress her immune system because it has tried to reject the transplant and regularly has a form of dialysis called photophoresis to filter the antibodies out of her blood. She’s enrolled in a study supervised by Dr. Tara Gregory to deal with it.

“I did Relay for Life this year. It was very inspiring,” Monica says. “The cancer gave me a more positive outlook and I don’t take anything for granted.” Her brother, who is now 21, is studying to be a doctor. “He wants to find out why this happens.