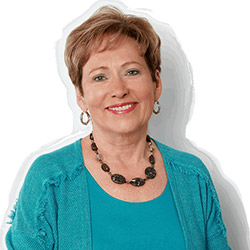 "Cancer may have cost me my hair temporarily and two inches in my spine, but I gained wonderful new friends, some of whom are also survivors, a new outlook on life and a renewed immune system through my stem cell transplant.”

In the spring of 2006, Barb, a 69-year-old multiple myeloma survivor, was exercising when she suddenly heard a “POP” in her chest. Through an x-ray, it was determined that she had broken a rib. Over the next few months, Barb started to experience back pain which eventually became so severe that by November 2006, she could hardly walk. Barb decided to consult her chiropractor for relief, who immediately noticed that she also had a strange cough and recommended that she visit her family practitioner.

The test results from her family practitioner revealed that Barb had cancer. “The nurse practitioner called me with my test results the same day as my visit and said ‘Barb, you have cancer and you need to see a cancer specialist. I’m so glad you came in today.’ I couldn’t believe it- it was the last thing I suspected.”

Dr. Matous recommended an autologous stem cell transplant, a procedure in which a patient’s own stem cells are removed and stored (frozen) while the patient receives a high-dose of chemotherapy to kill the unhealthy marrow cells. Then, the patient’s own healthy blood-forming stem cells are infused back into the blood. In addition, Barb opted to participate in a clinical trial to test prolonged survival by taking an oral maintenance drug following her transplant.

“The thought of a stem cell transplant was overwhelming at first, but Dr. Matous and my BMT coordinator, Vicki, explained the process so well and why it was the best option for me. Vicki was such a reassuring support through the whole process, carefully explaining every aspect of the transplant, including dates and all of the treatment and care steps. While it was a lot to absorb, Vicki made the process easier. One thing that made a stem cell transplant especially appealing is that Dr. Matous said I could possibly have a “drug holiday” in which I didn’t have to be on any medication,” said Barb.

In addition to her chemotherapy and stem cell transplant, Barb received kyphoplasty to reduce the pain of her seven spinal fractures caused by the cancer. Thereafter, Barb completed the process referred to as “restaging,” where she had many tests done to ensure she was healthy enough for a stem cell transplant.

In the fall of 2007, Barb prepared for her transplant by taking medication that moved her stem cells from her bone marrow into her bloodstream, and then received apheresis, the process in which the stem cells are harvested. 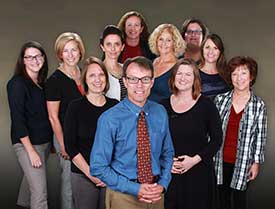 “Before my transplant, I had chemotherapy and my hair began to fall out. As a woman, this was emotional for me. But I didn’t let it get me down, I immediately bought a wig and kept on with life as much as possible considering the back pain and fatigue. Even though it was hard, I let people walk beside me during my cancer journey because I knew it was one of the keys to my success,” Barb said.

In October, Barb received her stem cell transplant, the infusion of frozen stem cells, in an outpatient setting, which was a painless, fifteen-minute procedure. “Right after the transplant, my entire care team came into my room and sang ‘Happy Birthday,’ recognizing that today was the birthday of my brand new immune system. I couldn’t have asked for a better team, as they really put me at ease through the whole process.”

The next few weeks Barb experienced extreme fatigue and required a large amount of sleep. “Even though I was tired, I had a great support system. My husband and daughter took care of me day and night, and I had many friends and family come stay with me at the outpatient care facility. With their support and my ability to rest as much as possible, I recovered well and was released home five days earlier than planned.”

After three months Barb started taking the clinical trial drug designed to assist with improving survival rates for post-transplant patients with multiple myeloma. Initially randomized, Barb had a fifty-fifty chance of being placed on the placebo drug or the maintenance drug. “I continued to improve and felt I was probably on the real drug. It was determined that clinical trial participants who received the maintenance drug were doing 60 percent better after transplant, so not long after I began receiving the drug, the trial was un-blinded to ensure that all participants could receive the helpful medicine.” The clinical trial was approved by the FDA and ensures that patients can now receive the drug as a maintenance therapy following a transplant.

Barb stopped taking the maintenance drug in July 2012 and has been in remission for about seven years. Currently, she is not on any medication and visits Dr. Matous and her healthcare team every three months for checkups. She will be followed on the trial for fifteen years.